Where is Lake Bogoria

You are here:
Corporate News

Where is Lake Bogoria

September found our team itching to explore Kenya. One place we have not been in a while is the rift valley. 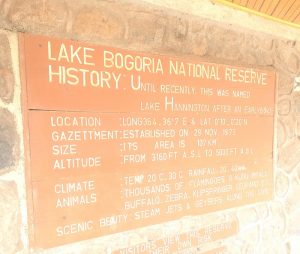 We left chilly Nairobi city at 5:15am on one of the Wednesdays in

September. Yes, we take random trips in the middle of the week. Destination, Baringo county where the waters of Lake Bogoria pool.

The road was light on traffic so it was a comfy, same speed ride to Nakuru, our first scheduled stop.

How to get to Lake Bogoria from Nakuru

The only place we found open in all of Nakuru was Midlands Hotel where we ordered a hearty breakfast a few minutes after 8am. Midlands hotel is one of the oldest hotels in the country. It opened for business in 1910 which clearly tells you its a colonial era establishment. Evidently, it still got its charm of high ceilings, quaint sturdy mahogany furniture and polished to shine wood flooring.
We got back on the road for the 1 hour hop to Eldama Ravine in the heart of Baringo county. We took the fourth exit on the second roundabout we came to on the Nairobi – Nakuru highway and made a left turn within 500 meters. The road leads to Lake Bogoria through Kabarak university. Also on the road side you see cattle grazing. The small by side shops have pure local honey for sale in different size containers of half kg to 1kg. But first we needed to detour to Eldamaravine town through the equator at Mogotio. 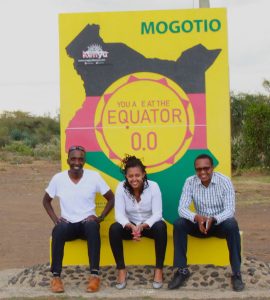 Comztech team on the way to Lake Bogoria

Eldamaravine has some of the best goat meat in Kenya and thats what we had for lunch; tender, succulent and tasty oven barbecued goat meat. Ugali is the best known accompaniment of goat meat although nowadays you can mix it up with chapati, rice or veggies. We chased the meal down with Mursik (traditional milk of the Kalenjin people). We hoped we would not sleep in the afternoon and miss out the fun. Anyway, even if we did sleep, Jim Collins’ would have been impressed because like he pointed out, ’life is uncertain, the future unknown. And this is neither good or bad. It just is like gravity’.

What to do at Lake Bogoria 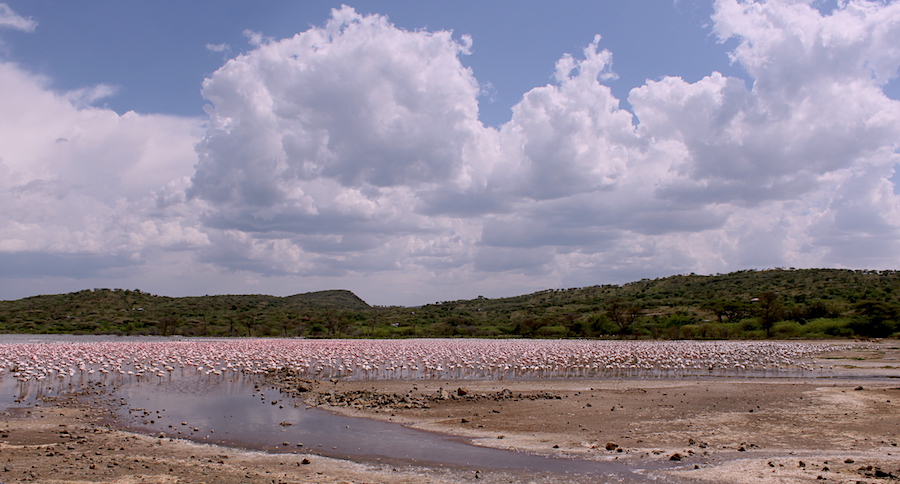 After lunch we set our coordinates to Lake Bogoria. Lake Bogoria is smack in the middle of the Kenyan part of the Rift Valley and its famous for its geysers and hot springs. This year it experienced one of “greatest spectacles in years, the current flock is larger than last year’s peak season. There are also a large number of juveniles, signifying a successful breeding season at Lake Natron where the birds often go to nest,” – James Kimaru, Lake Bogoria National Reserve senior warden. And we hang on to those words just ‘like a drowning man will cling to anything, even the tail of a great white shark if it happens to swim by,’ Lauren Wilkinson.

The Flamingoes of Lake Bogoria

We arrived at the Lake a little bit after 4pm wide eyed even after the significantly heavy lunch. And true to the warden words the flock of flamingoes were there standing in their lengthy thin legs, head held high by the long necks. Some in pink feathers others white, and a long beak which bends down at the tip. That small black tip makes the flamingoes much more aesthetically pleasing. An elder once shared, ‘ninety cows, ninety chicken, ninety goats,  ninety sheep is a lot, only 90 shillings are few because they can fit on your palm’. So all ninety flamingoes plus maybe two hundred thousand more of their cousins were there sticking their black tipped beaks in the waters enjoying everything that was available.

Definitely not Ugali but the likes of worms, seeds and other micro organisms. The smell made us wonder why they do not bath with all the available salty waters. But then again probably we were the ones smelling because every time we got closer to the flamingoes, they moved ever so magnificently away from us. And they made that space buffer by observing us just like ‘the moon has been observing the earth close-up longer than anyone and it has embraced the heavy past with cool measured detachment’, Haruki Murakami. 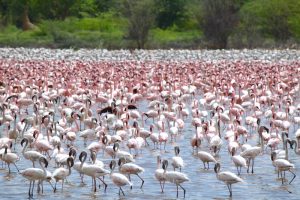 We watched transfixed the magnificent birds as they murmured to each other in unknown language, as they flapped their long wings and as they landed majestically from one end of the big pool to the other. So we got out of the self imposed reverie and bid farewell to the lake and the flamingoes and the worms inside the lake the best way we know, we snapped away pictures. Watch the short video . 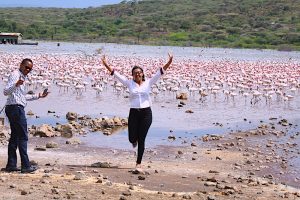 Shortly after 5pm we embarked on the journey back to Nairobi. And with the trip to Lake Bogoria, Thomas Watson’s words rang true that our ‘contentment doth not appear only now and then, as some stars which are seen but seldom,’ it remains constant scratching our itches for travel.